Brexit, the future of the Common Agriculture Policy, the approach by department of Agriculture officials and the ongoing poor price returns for farmers were all part of a comprehensive discussion between local MEP, Matt Carthy, and members of the local branch of the Irish Farmers Association at a recent meeting.

The meeting, which took place in the Creighton Hotel, Clones on Thursday evening last was presented as an ideal opportunity for local IFA members to engage with a member of the European Parliament’s Agriculture & Rural Development committee which has already began to assess the commission’s proposals for reform of the CAP.  Chaired by Laurence Deery and officiated by branch secretary Teresa Moore the meeting was also addressed by IFA Regional Chair Nigel Renaghan.  Local Councillor, Pat Treanor, accompanied Mr. Carthy.

In a wide-ranging report Sinn Féin MEP, Matt Carthy, gave an update on several areas of concern for local farmers especially the future of the Common Agriculture Policy.  He explained the the key immediate battle will be to protect and increase the budget allocation.  “Many are suggesting that the 5% cut in the CAP budget is due to a ‘Brexit hole’” he said, but “this is not true.  What the commission are proposing is a cut to CAP within the context of an INCREASE to the overall EU budget.  This is a failure on the part of the Irish government and Commissioner Phil Hogan”.  It is imperative, he said, that the CAP budget be increased for the next term.

Carthy also called for rebalancing of the distribution of CAP payments saying that it was unfair and unsustainable that a small minority of farm enterprises are receiving direct payments amounting to hundreds-of-thousands of euro while most struggle to survive.

A large portion of the discussion focused on the ongoing Brexit negotiations.  Matt Carthy told those gathered that it is imperative that the Irish government maintain its position regarding the so-called ‘backstop’ saying that it should be the absolute bottom-line in the talks.  Anything less, he said would have massive negative implications economically, socially and politically and would be particularly dangerous for farmers north and south.

In a wide-ranging discussion, the MEP engaged with members on a raft of issues affecting them.  A particular concern of farmers was the approach of Department of Agriculture officials.  Matt Carthy stressed that officials and inspectors should see their role as partners for farmers, rather than hostile opponents, which is too often the position they adopt he said.

Mr. Carthy also said that a huge issue that remains unaddressed is the massive unfairness in the supply chain that results in the lowest proportion of the price paid for food products going to those who actually carry out the bulk of work, namely the farmers.  He said that Sinn Féin is committed to tackling the overtly powerful position of retailers and processors and to strengthen the power of farmers in the chain.”

Speaking following the engagement Matt Carthy thanked the members of the IFA for inviting him to their meeting.  He also issued a welcome to everyone who has an interest in these matters to attend a seminar he is hosting on “The Future of Irish Farming” which will be held in the Iontas centre, Castleblayney this Friday, 9th November, commencing at 8pm. 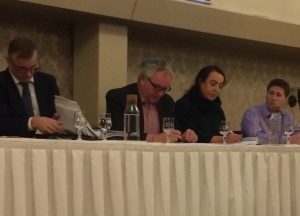