Sinn Féin MEP, Matt Carthy, has accused the government of breaking its commitment to address the transport shortfalls in rural Ireland including through a revision of the TEN-T CORE network to include a reinstatement of the Western Rail Corridor which Taoiseach Leo Varadkar had removed while being the Minister responsible.

Carthy, who is a member of the European Parliament Transport and Tourism Committee, revealed this week that he has received confirmation from the European Commission that the Irish government has not sought to review its TEN-T priorities despite a commitment to do so in the 2016 Programme for a Partnership Government.

“In the 2016 Programme for Government Fine Gael, Fianna Fáil and the Independent TDs supporting the arrangement agreed:

‘In the first three months the new Government will apply to the European Union for the revision of the TEN-T CORE Network, including applying for the reinstatement of the crossborder Western Arc’.

“My contact with the European Commission has confirmed my suspicions that the Irish government has not applied for a review, in any shape or form, of Ireland’s TEN-T CORE Network.

“The commitments made to rural communities by Fine Gael and Fianna Fáil at the time of the formation of the confidence and supply agreement obviously count for little.

“When I sought information from the Commission relating to the application, which was promised within three months of the formation of the government, the European Commission informed me that has been no moves to seek a review on the part of the Irish government.

“Ireland’s current TEN-T CORE map excludes the cross-border Western Arc, meaning that these regions are excluded from even applying for any substantial transport funding from the EU.  This exclusion is, of course, a direct result of Leo Varadkar’s intervention to remove the Western Rail Corridor from Ireland’s TEN-T map in 2011.

“That Fianna Fáil continue to engage with the confidence and supply agreement despite the failure to address key provisions of the Programme for Government, especially those relating to rural communities makes them complicit in this scandal of neglect.  Of course, both Fianna Fáil and Fine Gael have a record of decades of underinvestment in transport provision especially in the Border, Western and Midlands regions.

“The European Commission does not intend to carry out a review of the TEN-T core network until 2023.  With the inaction of the current government that could mean that EU transport funding will be closed off to the Irish regions that need it most for the next five years.

“That is not good enough.  A strong Irish government position could force a review earlier, despite Commission reluctance.

“I, and my Sinn Fein colleagues in the European Parliament, the Dáil and the affected council areas will continue to demand for TEN-T funding to reach rural Ireland and in particular for the Western Rail Corridor to be developed.” 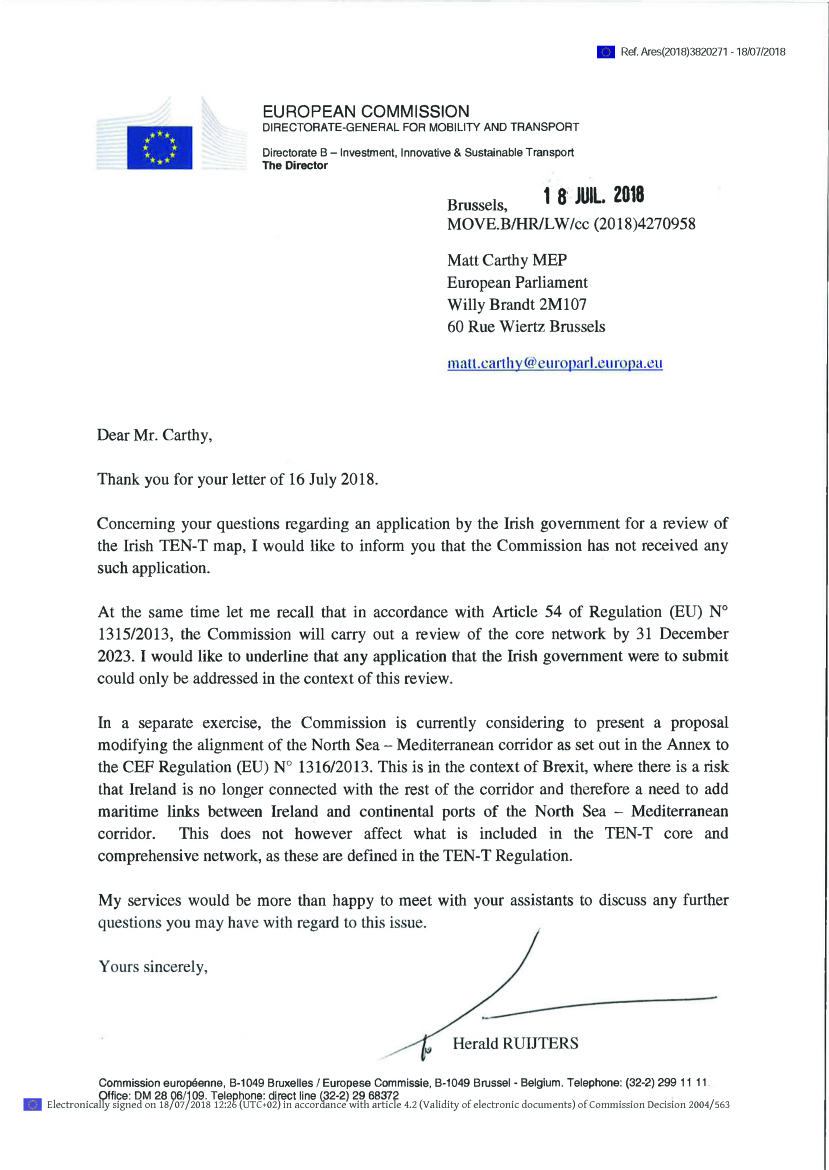