Sinn Féin MEP, Matt Carthy, has said he is disappointed but not surprised to learn that degressivity measures, aimed at reducing the highest CAP payments in order to increase supports to other farmers, have been a failure.  Carthy was referring to information received in a Written Question he submitted to the commission querying of the mechanism.

Carthy, who is a member of the European Parliament’s Agriculture & Rural Development Committee, commented:

“The Commission regularly claims that it has taken effective action to reduce farm payment inequality.

“The headline action was the introduction of degressivity as part of the 2013 reforms. It was agreed at the time that payments over €150,000 would be digressive.

“Unfortunately the measure was immediately diluted by the provision of Member State flexibility to decide by how much they would reduce the monster payments.  The majority of Member States decided to do the minimum by applying just a 5% reduction.

“When the Member States notified the Commission of the estimated result of the reduction of the payments mechanism, for the five years 2015-2019, a figure of €553 million was given. This equates to €111 million being reduced through digressively annually.

“In 2016 direct payments amount to €41 billion, making the prospective savings gained that year a little over a quarter of 1%.  This is hardly the necessary radical rebalancing of payments that the Commission promised.

“The response to a written question I submitted to Commissioner Hogan unearths the true extent of the measures inadequacy.  The information provided clarifies that for the two years for which figures are available less than €200 million has been redistributed; €98 million in 2016 and down to 79 million in 2017.

“On those figures, by the end of 2019, the target will have been fell short of by over €100 million.  This is €100million that could and should have been redistributed to farmers currently receiving lower payments.

“Such underwhelming results should provide the Commission with the impetus to finally address the inequalities in farm payments through the new CAP process.  Unfortunately Phil Hogan’s proposals simply tweak a broken system rather than attempt to fix the inherent unfairness that sees 80% of CAP payments go to the wealthiest 20% of farm enterprises.

“Plans for putting in place an upper payment limit capping in the new CAP have been deliberately riddled with loopholes to such an extent that representatives of the European Commission have informed me, in an assuring way, that larger payment recipients will not be affected by the changes to any great extent.

“The CAP process is failing to support those farmers who need it most in order to protect the wealthiest and largest farm enterprises.  This needs to change.

“I, and Sinn Fein, will continue to campaign for a fairer distribution of farm payments so that we can guarantee Irish farmers a viable future for generations to come”. 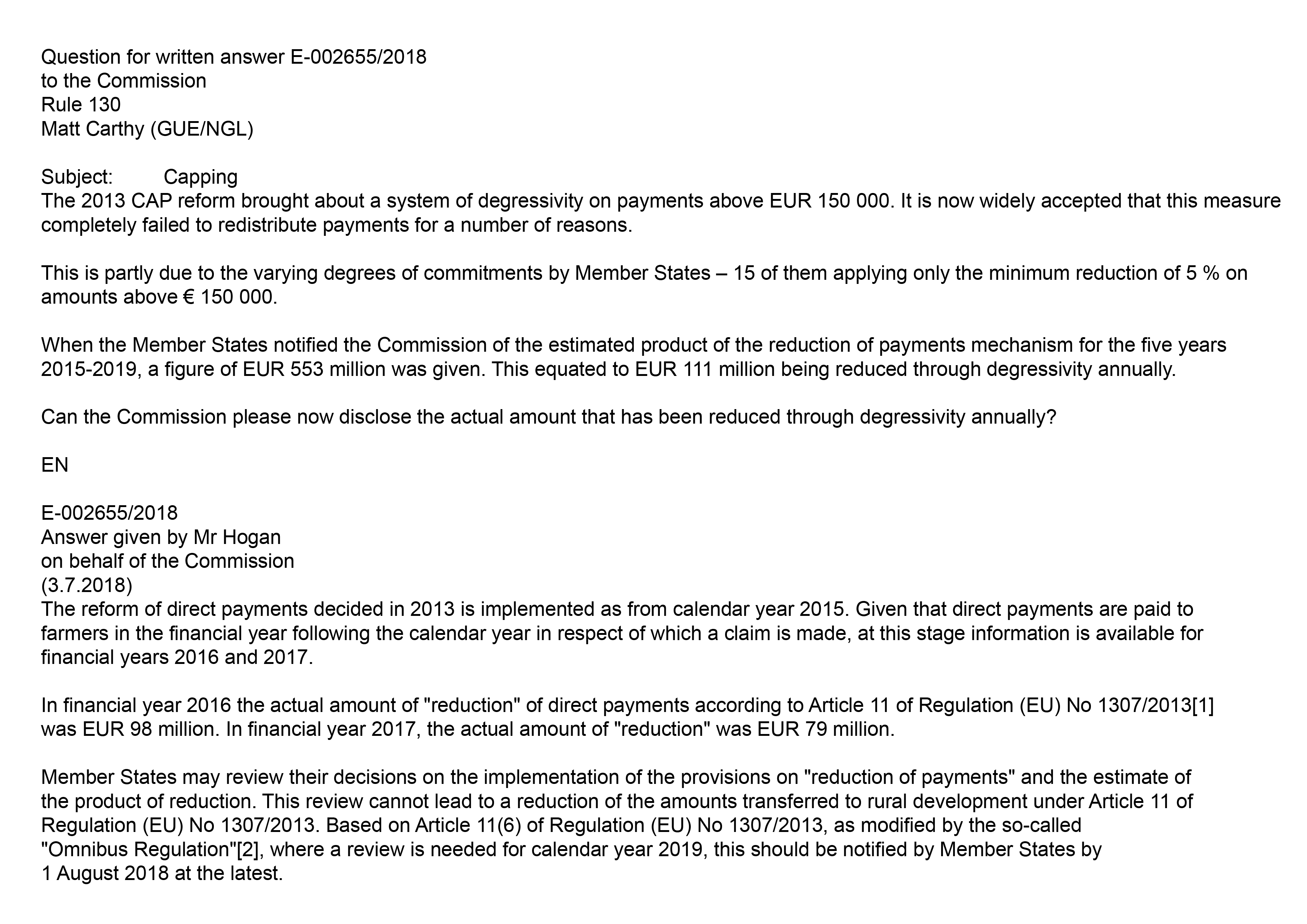