Local Sinn Fein MEP, Matt Carthy, joined Friday’s protest organised by the ICSA outside the ABP plant in Clones.  Carthy, who was accompanied by local Councillor, Pat Treanor, said he attended to show solidarity with farmers and to send a clear message to government and processors that the current situation is untenable.

Carthy, who is a member of the European Parliament’s Agriculture & Rural Development committee, commented:

“I commend the Irish Cattle & Sheep Farmers Association for organising Friday’s protest and for shining a light on the desperate market conditions their members are working with.

“The clear message I heard from protestors was that the current situation is being exploited by processors and that the prices being secured are untenable.  Government need to also get that message.

“The ongoing reduction in beef prices have been compounded by this year’s weather conditions.  Feed bills have spiralled while other costs have mounted yet rather than solidarity from the beef sector there have been attempts to exploit the situation while the government sit on their hands.  The ongoing reduction of prime cattle base quotas shows processors lack of regard for suppliers on the edge.

“It is unfortunate that the only rise in prices may come from scarcity of supply due to the unfavourable market conditions.

“Minister Creed claims this is beyond his control, but the rise in beef prices in Britain expose this fallacy.

“Farmers must be able to depend on the government to challenge factories and retailers when they are clearly exploiting market conditions.  Instead, government are content to allow farmers to use CAP payments to compensate for poor prices.

“Average incomes in the sector amount to just 60% of the “living wage”.  This is clearly unsustainable.  Government intervention is required now.  Minister Creed must declare whether he is willing to provide the leadership required or if he intends to pursue his strategy of inaction.  If the latter, then he should be removed from office.

“For our part, Sinn Fein will continue to support farmers’ call for a sucker payment and we continue to press government to face down the processors who continually exploit vulnerable farmers”. 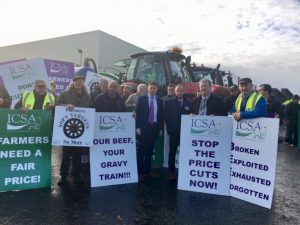 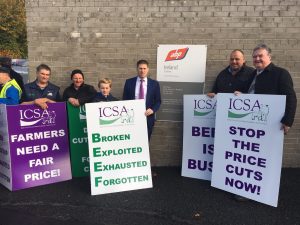