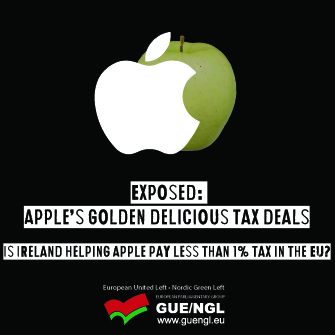 Sinn Féin MEP Matt Carthy has commented on the publication of a new study on Apple’s tax rates and corporate tax structure following its 2014-2015 restructure. The report was published this morning, Thursday, by the GUE/NGL group in the European Parliament.

Carthy, a member of the TAX3 special committee on tax evasion, tax avoidance and money laundering, said: “The TAX3 committee requested Apple appear at a hearing of the committee on June 21. The hearing took place this morning without Apple’s presence. It is not acceptable that Apple – and others – have refused to appear before the special committee, and the Parliament needs to take action in response to this.

“The GUE/NGL group has published a new report that examines Apple’s tax rates and structure post-2014, and also examines the role of Irish tax law and policy that facilitate tax avoidance.

“After the state aid ruling, we’ve been told by Apple and the Irish government that things have changed and Apple is paying tax at Ireland’s statutory rate of 12.5%. But this report shows that with the help of the Irish government, Apple has successfully created a structure that has allowed it to gain a tax write-off against almost all of its non-US sales profits.

“Despite the state aid ruling and despite the Irish government pledging to take action to combat tax avoidance, Apple today continues to pay almost no tax on its global profits. Researchers found that Apple may be paying as little as 0.7% tax in the EU from 2015 to 2017.

“The structure Apple uses today, that was partially exposed in the Paradise Papers and which the authors of the study dub the ‘Green Jersey’, was designed by the industry and willingly implemented by the Irish government as a replacement to the Double Irish scheme. It is based on the use of capital allowances for expenditure on intellectual property and massive intra-group loans to purchase the IP, with full deductions on the interest paid for these loans, in order to cancel out the tax bill arising from sales profits.

“The study shows that the Irish government’s decision to introduce the 100% rate on capital allowances for IP followed a recommendation made by the American Chamber of Commerce in Ireland in 2014.

“Apple is not alone in using this scheme, and corporate law firms are advertising that this structure is now typical for large multinationals engaged in trading in intellectual property – and that it can reduce the tax rate in Ireland to 2.5%.

“The government has failed to ensure that Apple and other IP-based multinational corporations pay a fair rate of tax in Ireland. We urgently need a reappraisal of the capital allowance and interest deductions that apply to the intellectual property brought onshore over this period (2015-2017) and afterwards.”