Matt Carthy MEP addressed the crowds at the Sinn Fein Ard Fheis today, outlining the importance of Sinn Fein’s role in government on both sides of the border.

“At the next election, we will ask the people to support our effort to change Ireland for the better.”

“To support us in changing Ireland from the front – in government north and south.”

“Because, to secure the type of change that Ireland needs does require Sinn Fein in government” 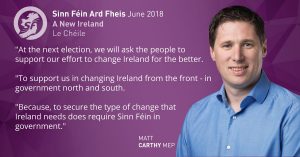