Speaking at the recent Sinn Féin Ard Fheis in Belfast, Matt Carthy MEP said “Mé Féin politics thinks that the way to deal with difficult issues is to set up bodies like the HSE, purposefully designed to allow politicians avoid the blame when things go wrong.”

“Sinn Féin politics wants accountability – It thinks that when a catastrophic failure occurs someone should pay the price and it shouldn’t be women like Vicky Phelan, Emma Mhic Mhatúna or their families.” 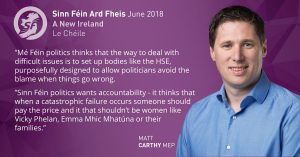