Local Sinn Féin MEP, Matt Carthy, has commended the members of the Cavan & Monaghan branches of the Forsa Trade Union who travelled to Brussels last week as “committed representatives of their fellow workers who used the opportunity provided to bring their concerns directly to the heart of EU decision making”. 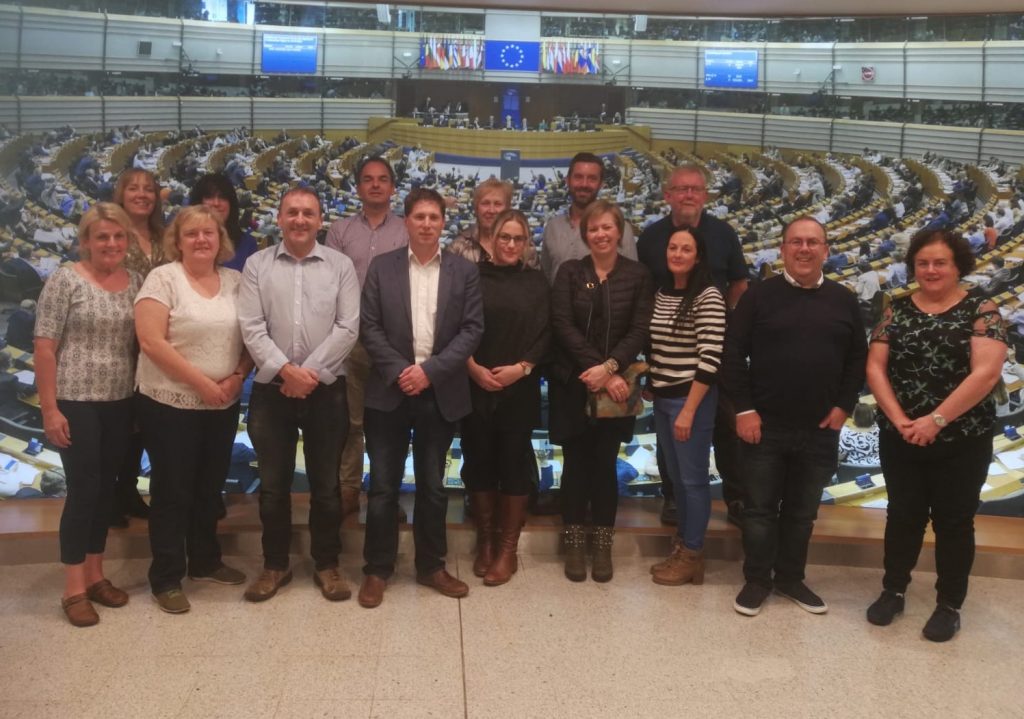 A delegation of members from Fórsa, which predominately represents workers in the state and semi-state sectors, from counties Cavan and Monaghan partook in the two-day fact-finding trip to the European Parliament hosted by Mr. Carthy. In Brussels, they met with EU-wide trade union organisations and other civic bodies who provided comprehensive briefings on upcoming legislative files that may affect Forsa members and public services in Ireland.  The delegation also engaged with members of the European Parliament’s Brexit steering group as they outlined the concerns of workers in the border region while also receiving details of the forthcoming negotiations.  Among those in attendance were senior regional Forsa representatives including Assistant General Secretary, Barry Cunningham.

As it happens the delegation also had an opportunity to speak to one of their local TDs as Caoimhghín Ò Caoláin was in Brussels to attend meetings in his capacity as chair of the Oireachtas committee on Justice & Equality.  Deputy Ò Caoláin took time out of his own schedule to drop in to meet the group.

“I was pleased to be in a position to invite and host a successful set of engagements with the Fórsa Trade Union in the Brussels last week. The European Parliament is increasingly seeing legislation coming before us that could potentially impact workers’ rights and that could threaten the work of trade unions.

“It is therefore extremely important that trade unions and others concerned for workers’ rights are aware of the developments at EU level and appraised of the legislation that passes through the European Parliament.  The level of lobbying, particularly by large corporate interests, on EU legislation is immense.  Vast amounts of monies are spent by corporate lobbyists in attempts to shape EU legislation for their own vested interests.  Workers require that their unions are equal to that challenge by being informed of proposals coming before governments and MEPs.

“With the necessary knowledge progressive forces across the EU can work together against poor legislative proposals or dangerous trade deals which can negatively affect the terms & conditions of workers or public services broadly.

“It was for this reason that I invited the members of Forsa from my home constituency of Cavan and Monaghan to partake in this delegation and to meet with organisations such as the European Trade Union Confederation & the European Public Service Union and to receive presentations regarding issues such as the migration crisis, corporate tax avoidance and EU trade deals.

“Importantly the delegation also met with representatives of the European Parliament’s Brexit steering group.  Brexit will particularly impact Irish people living in the border regions.  It is crucial that Brexit does not lead to an unfair playing field or undermine workers’ rights on the island of Ireland.  The voices of workers and their representative trade unions must be heard in this process.

Concluding, Matt Carthy said:  “Since my election as MEP I have attempted to ensure that all my constituents are aware of the work that I have been doing on their behalf and also of all developments at EU level that could affect their families and communities.  An important element of this work has been hosting representatives of important sectors to Brussels and this most recent delegation was part of that process”.

Speaking following the visit, one of the Forsa delegates, Paul Gibbons of the Monaghan Branch, thanked Matt Carthy and his office for hosting their members for the two-day visit.

Mr. Gibbons said: “The chance for a Forsa delegation from Cavan and  Monaghan to visit the European Parliament in Brussels afforded us unprecedented  educational and lobbying opportunities. We learned first hand about the work of the European Parliament, Commission and the various Institutions and how they impact on the lives of all European Citizens. We also had a range of high level meetings and briefings with relevant stakeholders on a range of issues of interest to trade union activists on areas such as EU legislation and developments focussing on workers rights, the future of the EU, the future of public service in Europe, taxation, the migration crisis, the role of lobbying in Europe and Brexit.

“These meetings were hugely educational but also afforded us the opportunity to share our views and practical on the ground experiences in all of the areas discussed to these influential European groups.  The issue of Brexit was a recurring theme across all meetings.  The Irish Congress of Trade Unions have well developed policy positions and real concerns around Brexit and the delegation highlighted them at every opportunity.  In addition as trade union activists from the border region the group spoke authoritatively on the numerous negative implications on the quality of life that a hard border would bring. The group really embraced this opportunity and ensured that the voice of trade union members and activists from across Cavan and Monaghan was heard loud and clear in the corridors of power in Brussels”.