Carthy facilitates dialogue between farming organisations, farmers and the European Commission in Castleblayney.

The public seminar kicked off on a torrential Friday evening in the Iontas Centre in Casteblaney town. Despite the weather, representatives from nearly all major organisations attended, along with a large number of farmers from across the midlands North West region. The only notable absence on the night was the ISCA, who were unable to attend at short notice. Chiara Dellapasqua represented the European Commission and DG AGRI. 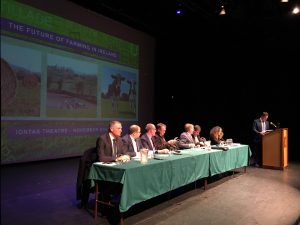 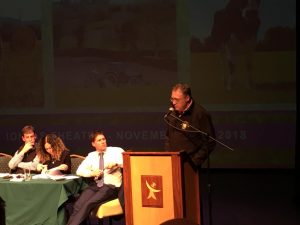 Carthy opened the event and gave the floor to Ms Dellapasqua to present the European Commission’s proposal for the new CAP. She outlined that the new CAP will continue with the two-pillar structure but we can expect to see many changes to environmental measures. Greening, to the delight of many, has been scrapped. Many of the measures previously contained in greening have been incorporated into what is called “new enhanced conditionality”. The Commission believes that this will be more ambitious than what was contained in the previous CAP.  As expected, attention peaked when talk of payment capping and the budget came about. Ms Dellapasqua told all in attendance “the EU has lots of priorities and they need to fund these effectively, CAP is not the only priority”. She also cited the budgetary hole left by BREXIT. In relation to basic payment capping, she admitted that large farms would be able to write off labour costs, thereby retaining payments over €100,000. 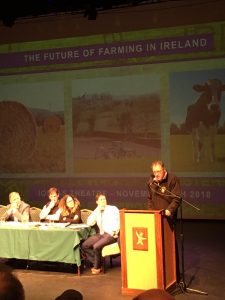 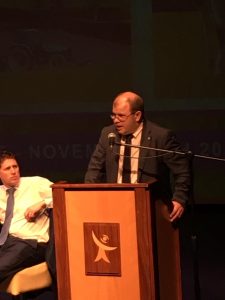 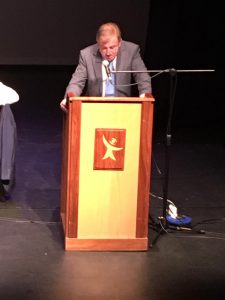 Ms Dellapasqua was followed by Joe Brady from the IFA. Brady set the stage by outlining some of the contradictions in the sector. AGRI food exports are up 69% on 2010 levels yet direct payments can make up over 100% of dry stock income. He reminded the audience that for every 1 euro of support to suckler farmers there is a spending of €4.20 in the local economy. Brady used this opportunity to stress to the Commission representative some of the problems he perceived in the Commission proposal. “There is an excessive burden on farmers, the number of GAECs must be reduced, we need more penalty tolerances in penalty assessment and 14 days’ notice before an inspection”. He concluded by saying that the IFA supports an increase in contributions to the EU from Ireland to the point of 1.3% of GNI.

The next speaker was Wesley Aston. Aston gave a short but essential contribution on BREXIT. It was clear from his contribution that he was not confident in the British Government’s commitment to maintain CAP payments pound for pound. He also mentioned the importance of cross border cooperation after BREXIT and he agreed that a hard border would be a disaster for the island as a whole. Before carrying on to the next speaker, Matt Carthy spoke directly to Aston when he pointed out that farmers in the North will most certainly be worse off. “Currently the North gets about 9% of UK CAP funding, this will fall to as little as 3% under the calculation method that Britain intends to utilise post BREXIT. 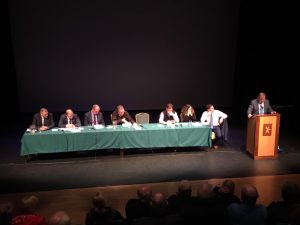 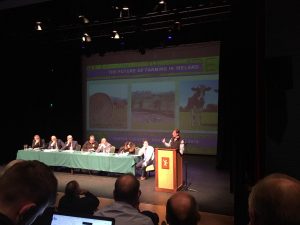 Next spoke Colm O’Donnell from the INHFA. He began by outlining how the INHFA had come into existence. “The INHFA is a new organisation and mainly represents farmers on marginal land in the Midlands, Border and West, that would be on fairly low payments”.  O’Donnell used Monaghan as an example to illustrate that the farmers on large payments are few and far between. “In Monaghan there are 3972 farmers getting a payment, 2043 of these are on payments under €5000 and 1079 are on payments between €5000 and €10,000. In the country, there are 86,000 farmers on payments of less than €10,000. O’Donnell did not mince his words when he said that full convergence of per hectare payments is the only way to increase the incomes of many struggling farmers. He also raised concern about the “new enhanced conditionality”. He believes that the new rules on protection of rich soils and peat land will make it effectively impossible to farm a lot of the land. He sees this as the European Commission denying farmers the freedom to farm the land and that they want to turn it all into designated land.

Lorcan McCabe, from the ICMSA, gave further elaboration on the dangers posed by BREXIT, particularity in the dairy industry. “33,000 Lorries cross the border every year and we cannot have any kind of disruption to this movement or costs will rise”. He said that the dairy industry has tried to shore itself up through the recent merger of Lakpatrick and Lakeland but the scale of the disruption is still very much an unknown.  McCabe cautioned about the capping of direct payment and said it felt a bit like taking from Peter to pay Paul. He did not offer any prediction as to when the dairy bubble may burst but told the audience that some of the reports of massive profits in dairy are over hyped.

The keynote speaker of the night, to deliver Sinn Fein’s vision for the CAP, was Sinn Fein Deputy Martin Kenny, the party’s agricultural spokesperson. Kenny laid out why he believes the CAP is essential to the industry and can “stabilise high quality food production, protect the environment and sustain the family farm”. You could see the crowd visibly perk up when Kenny demonstrated that Sinn Fein has a very real idea of what a fair payment system could look like. “We need all farmers to be getting at least €400 for the first 15 hectares and at least €250 for the next 15. We need to see the 30 to 40 hectares farm taking in between 8000 and 1000 in pillar 1”. Kenny expressed his reservations about the voluntary nature of the new CAP pillar 1 ECO scheme. “Environmental protection should not be left to farmers on bad land”.

On prices, Kenny pointed out that the EU rules on the free market can tie our hands but nonetheless the Irish government needs to intervene to do what it can. “Getting a fair price for our product would mean we can pivot towards higher value instead of higher volume. This would help us achieve our climate goals”. Kenny concluded by welcoming the new rules on subsidiarity and pressed that this opportunity must not be squandered “by short termism or feeding the already well fed.  We must be mature and practical in providing for the greater good, which is also the individual’s long term good”.

The last to speak was the President of Marca, James Healy. Healy opened by talking about the current situation faced by young farmers. “Finally we have slightly more farmers under 35 than over 80.  “However, young farmers still are not always getting the payment when they lease land”. Healy spoke about the need to encourage farm transitions better such as farm partnerships. He also talked about the need for a new farm retirement scheme.

The speaker’s contributions was followed by a Q & A section with the audience. Here the farm representatives were hit with some of the hard questions. Such as why women are not more prominent in farm organisations, and why does the IFA not see capping as valuable when they acknowledge it would put at least €150 extra in the pocket of every farmers, and for many a lot more. Joe Brady from the IFA responded that capping is not going change much for the majority of farmers considering the increase would be less than €200, at which point Carthy reminded him that this might be an extra week’s payment for some. Brady also pointed out that 5 out of the 29 IFA county chairs were women. 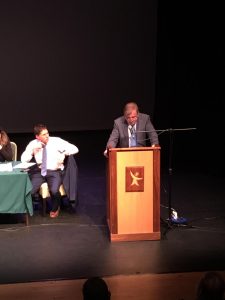 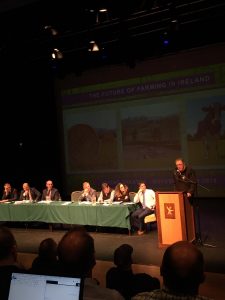 The meeting finished at 10.30pm but many stayed on to chat and debate with each other further.

Carthy was pleased that he had been able to facilitate a healthy debate among the farm organisations and farmers on what direction they want the new CAP to go. Carthy seen it as a good learning opportunity for the European Commission to come out and hear first-hand some of the problems that the rules they create can cause for farmers. No doubt, discussions will continue over the coming months as Carthy submits amendments to the proposal and fights to defend a strong budget for the CAP. 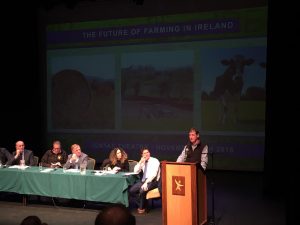 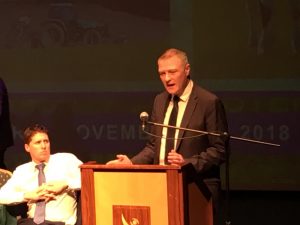 Carthy facilitates dialogue between farming organisations, farmers and the European Commission in Castleblayney.