“A perfect opportunity perfectly seized” was how local Sinn Féin MEP, Matt Carthy, described the visit of his fellow members of the European Parliament’s Agriculture & Rural Development (AGRI) committee to Ireland last week, which included a stop in County Monaghan. 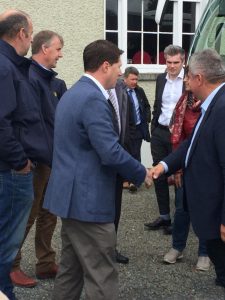 Matt Carthy had originally proposed a year ago that the AGRI committee visit Ireland to hear, at first hand, farming and community concerns regarding Brexit, the future of the Common Agriculture Committee and the need for improved funding opportunities for rural areas.  It took a year to bring the visit to fruition but the opportunity provided was seized upon by the various interests who had an opportunity to engage with the parliamentarians during their stay. 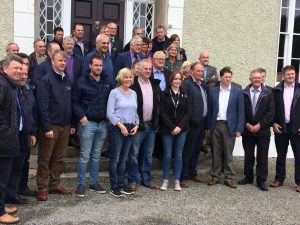 It was apt that the first port of call for the delegation after they landed in Dublin airport was the home county of Matt Carthy.  The Sinn Féin representative had originally intended that the entire visit would focus on the border region, as the area most at risk from the implications of a bad Brexit deal, but the European Parliament ruled such a prominent Brexit focus would undermine the work of the steering group tasked with leading on that issue.  Instead, Carthy ensured that a visit to his own border county of Monaghan would become a central feature of the trip. 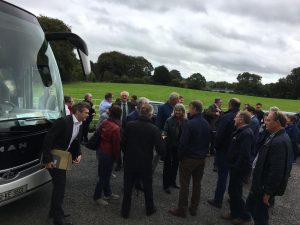 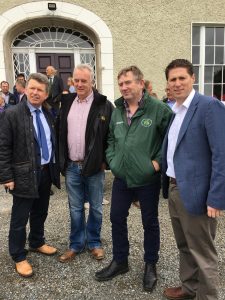 The 11 MEPs who made up the delegation arrived at the farm of Eamonn Markey and his family for an IFA organised engagement at 12.45 on Tuesday.  There, they, alongside the large team of support staff and interpreters, were treated to superb Irish hospitality.  No time was wasted as several IFA representatives, which included Ulster/ North Leinster Regional Chair Nigel Renaghan and Monaghan County Chair Frank Brady, outlined their key concerns regarding margins received by farmers, the need to maintain and increase CAP funding and the fears many Irish farmers have regarding Brexit.

The president of the Irish Natura and Hill Farmers Association, Colm O’Donnell, made an intervention of behalf of his members and he reiterated the call for CAP funding to be increased but also for that funding to be distributed more fairly.

There followed a lengthy engagement with MEPs who questioned the practises of the Irish family farm model, which all agreed was a valuable system that needed to be protected and enhanced.  The chairperson of the AGRI committee, Czeslaw Adam Siekierski (Poland) commended Irish farmers, especially in the livestock sectors for their resilience over some turbulent periods.  He also presented a token of thanks to the Markey family.

The delegation then proceeded to visit Killanny Community centre where they were introduced to, in the words of Matt Carthy “an Irish rural community at its best”. 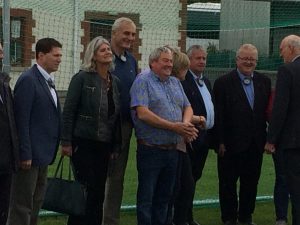 Following an initial discussion with representatives of the Ulster Farmers Association where, again, Brexit was a major focal point, and where MEPs from various countries reiterated their view that special arrangements that must be found to protect the ‘island of Ireland’ nature of delivering agricultural product.

In welcoming delegates to the Killanny centre Matt Carthy reminded his fellow MEPs that an important element of the Common Agriculture Policy was ‘Rural Development’ and it required protection as much as farm supports.  He pointed out that rural communities in Ireland were under sustained assault as a result of the policies of successive governments.  Were it not for CAP supports, including Rural Development funding through programmes such as Leader, then many rural Irish communities would be in even more difficulty.

Carthy said that the reason he had asked that the delegation visit Killanny was so that they could see at first hand how the partnership structure worked in practise.  “The model used in Killanny, which is replicated in parishes across rural Ireland is one where EU and national funding were strengthened through local fundraising to provide facilities such as sports fields, a community centre, a play-park and even a successful childcare facility which allowed dozens of families to live in the area even if they had to travel for employment” he said.

Local community representatives Michael Crawley, Declan Gartlan and P McMahon provided an outline of the work of the community in achieving, by uniting together with common goals, projects that benefit every generation.  They made a passionate case on the importance of funding streams such as the Leader programme for rural areas in general and also of PEACE and Interreg funding for the border community.

When the delegation had been brought around a tour of the centre and adjoining sports grounds they were left in no doubt that when supports are available and when an active community comes together to utilise them, then rural Ireland remains a viable and vibrant concept.

Speaking as the delegation was departing the Monaghan leg of their journey MEP Carthy told the Northern Standard that he was pleased with the outcome.

He said:  “This was a case of a perfect opportunity, perfectly seized.  When I first suggested that the AGRI committee visit Ireland I had no idea that so many MEPs would agree to participate or that their number would include the chair of the committee himself.  I want to thank the committee and especially my constituency colleagues, Mairead McGuinness and Luke Flanagan for supporting the proposal that the trip include a visit to Co. Monaghan.

“The farm organisations utilised the chance to set out their priorities to politicians that will play an important part in framing the next CAP and the outworkings of Brexit.  The Markey family provided a masterclass in Irish hospitality and I want to thank Eamonn and Mary and their family for taking on the mantle for the IFA of hosting the delegation at their home.

“The representatives of Killanny community did exactly what I thought they would do – by highlighting all that is good about a rural Irish community – they are a credit to their parish.

“The visit has made the job of Irish MEPs easier.  In future when we discuss issues in Brussels or Strasbourg pertaining to Irish farming and Irish community life our colleagues will have personal experiences to recall that, I firmly believe, will leave them more amenable to Irish concerns” the Monaghan representative contended.

During the course of the rest of visit MEPs visited a farm engaged in conversation agriculture practices in Co. Louth; a ‘Farmers Journal’ run farm in Co. Offaly; Slane Castle, Kilbeggan Distillery in Co. Westmeath and the headquarters of Horse Racing Ireland in Co. Kildare.  Most of these visits occurred on Wednesday in lieu of the planned visit to the National Ploughing Championships which had been cancelled due to inclement weather that day.  Not to be out-done the delegation eventually made it to the ploughing on Thursday before travelling back to Brussels.

“But, having spoken to many of the MEPs in attendance the highlight for many of them was of course their visit to Co. Monaghan!” Matt Carthy contended afterwards. 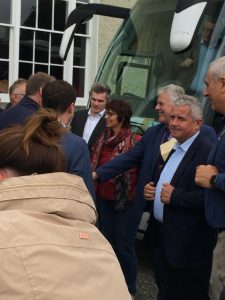 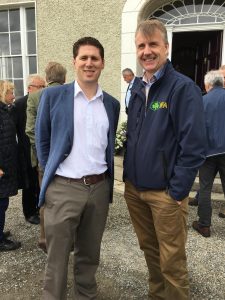 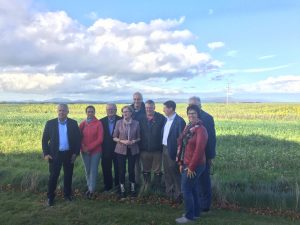 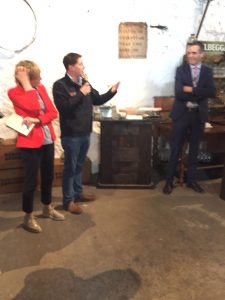